We personalize the lessons to respond to student’s specific needs, whether you’re a beginner or are simply looking to improve. Depending on your goals, we can offer you the opportunity of learning theory, different playing techniques, composition and stage presence.

We carefully selected books and varied methods perfectly suited to the student’s level in order to teach them how to read sheet music, chord diagrams, and musical notation.

Each WIMA studio is outfitted with quality accessories and equipment. You only have to bring your flute, your sheet music, and your smile!

In order to teach the musical basics while respecting the musicality of each student, we encourage them to show their teachers their favourite pieces and to choose the musical style that they would like to work on. 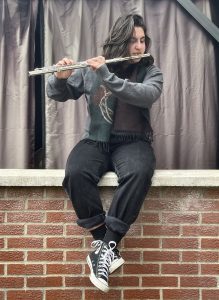 Eli’s greatest love is music and they hope to motivate students to develop a passion for all things music related. They have been studying the flute since they were 12 years old and are currently completing their CEGEP degree at the Conservatoire de Musique de Montreal. They are fluent in a variety of styles of music such as baroque, classic, romantic and contemporary. Eli is also the director of the West Island Youth Vocal Ensemble where they aspire to connect youth through music and song. They are passionate about creating a safe and fun environment for students to express themselves while also growing and learning new skills.

Eli teaches on Sundays in Pointe-Claire. 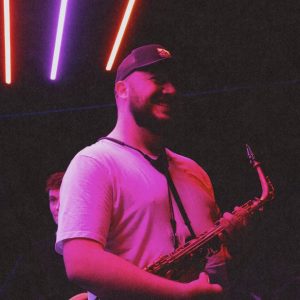 Malcolm is a Montreal-based saxophonist and pianist who specializes in jazz performance, as well as composition and arranging.

Malcolm had a foot in music his entire life, learning piano and clarinet at an early age, but he really started his musical journey at Royal West Academy where he first learned saxophone and played in the most prestigious wind orchestra/marching band there – Honour Band – as well as the resident jazz band. This is where jazz really captured his interest, and pushed him to move forward into the professional jazz performance program at Vanier College. There, he developed a passion for arrangement and composition. Vanier is also where Malcolm began tutoring other students, thereby starting his teaching career.

Malcolm went on to further study jazz performance at McGill University, where he received nearly a full scholarship upon entry.

Today, Malcolm practices multiple instruments (specializing in saxophone), and plays in several ensembles including an anime OST cover band. He has begun to branch out into music production as well.